Kristen Yaldor was not thinking about travel insurance when a hippo flipped her out of a boat and took a chunk out of her leg while she was on safari in Zimbabwe. In fact, it never occurred to her or her adventuresome husband, Ryan, that they would ever need it. Surviving the attack was only the beginning of a more than two-year ordeal that would include an evacuation first to a local clinic, then to a South African hospital, and finally home to Florida and more than 20 complex Surgery.

In February 2020 I was on the Diamond Princess cruise ship when an unknown virus that had only been discovered in China a few weeks earlier struck. Soon more than 700 passengers and crew were infected, and we were quarantined on the ship for two weeks and then again on a US Air Force base for another two. We had prudently covered our Asian trip with what we thought was a comprehensive travel insurance policy, only to find out that pandemics were excluded from coverage.

Cruise companies and travel packagers have lured customers back with more flexible COVID-19 cancellation policies, and travel insurance will cover many — but not all — of the predicaments that can occur if someone acquires the virus before or during a trip. Also, some tour companies and countries now require insurance.

Frequent travelers are opting for annual travel insurance policies because the rates compare favorably with insuring a few trips a year, but the devil is in the details. Some of the coverage may be secondary (expecting your regular health insurance to pay first) and they may not cover coronavirus as broadly as a single-trip policy. Others decide they can “self-insure,” assume they can handle the loss of the cost of their trip if something goes wrong. Statistically, few people have a major medical crisis on vacation, and evacuations are rare.

Maybe it’s me, but I’ve been on two cruises where helicopters have critically ill passengers; have been on a ship that turned back to port to disembark someone with a heart problem; and had a friend who had a stroke in Turkey and had to pay for the flight home with medical escorts. We’ve traveled with someone who broke her hand and had to fly from the Caribbean to Europe for complex surgery. Another friend fell in India, broke her femur, had surgery there and required medical assistance while flying in a cast back to the United States.

Many years ago, when a friend joined a virus strain of malaria in Haiti, we arranged a lifesaving rescue. After our Galapagos adventure, one of our companions developed altitude sickness en route to Machu Picchu and was evacuated. I’ve been treated with IVs on a cruise ship and just last summer spent the night in an Italian hospital because of a heat-related issue.

Every traveler should have COVID-19 coverage, but even the newest policies do not include border closures, quarantine restrictions or negative test requirements unless you purchase Cancel for Any Reason (CFAR). This will typically reimburse around 75% of the insured trip cost, but the premium also increases by 40% to 50%.

For example, two people, both age 50, going to Turkey and spending $10,000 would pay $600 for CFAR but $400 without. If Turkey closed its borders or they had to cut their trip short due to an outbreak, the couple would receive $7,500 back. Without CFAR, though, they would lose the full cost of their trip or $10,000. However, if they had a standard (non-CFAR) policy and couldn’t travel because of a death in the family or accident or illness — or even testing positive before or during the trip — they would be reimbursed the full $10,000.

Insurance comparison sites usually offer better deals than buying from someone who gets a commission. Evaluating offers from several companies can be tricky even if you read the fine print. Here’s what most people should prioritize:

Primary medical: at least $50,000. They key word is “primary” so you are covered without having to submit your claims to your regular provider.

Trip interruption: 150% of the cost of the trip because last-minute flights and other emergencies will cost more. Most COVID-19-related issues, such as quarantining in a hotel, fall under this provision.

After running various scenarios on many comparison and corporate sites, the best value and most transparent information seems to be on Squaremouth.com, which offers a wide range of policies (many with primary medical) and offers the same “zero-complaint” guarantee for every offer on their site. Anyone I know who has had a claim through them — including me — has found them responsive and fair.

Even though the Yaldors did not have travel insurance, they had charged their trip on a premium credit card with a high yearly fee like American Express Platinum or Chase Sapphire Reserve, and Kristen’s $250,000 evacuated was paid in full. If you have — or are considering — one of these cards, be aware that their coverage is usually secondary — after any other policy pays. However, in a life-threatening emergency they will guarantee payment (up to their limits) and arrange for all of the services.

Even if you have never considered travel insurance before, the pandemic has added more risk to your travel dollar than ever before. Let’s just hope you never need to use it.

Kristen Yaldor poses with the crew that returned her to the United States after being attacked by a hippopotamus on the Zambezi River in Zimbabwe. Photo courtesy of Ryan Yaldor. 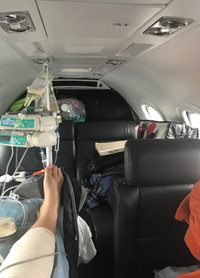 Kristen Yaldor waits for takeoff as she’s evacuated from Zimbabwe after being attacked by a hippopotamus on the Zambezi River. Photo courtesy of Ryan Yaldor.

A helicopter evacuates a COVID-19 passenger from the Diamond Princess in Tokyo, Japan. Photo courtesy of Philip Courter.

Novelist and travel writer Gay Courter’s latest book is “Quarantine: How I Survived the Diamond Princess Coronavirus Crisis.” To read features by other Creators Syndicate writers and cartoonists, visit the Creators Syndicate website at www.creators.com.