KENTUCKY — June 12 is recognized as Women Veterans Day in Kentucky. The day is not recognized nationally, but Kentucky is one state that uses the day to honor the service of women in the armed forces.

What You Need To Know

Woman. Trailblazer. Hero. Veteran. Each of the women on the flight had unique experiences, but those are the things that unite each of them.

“I’m thoroughly enjoying being with so many female veterans and we are honoring each other,” said Marj Graves, an Army veteran and Honor Flight participant.

Woman. Trailblazer. Hero. Veteran. Nearly 150 female veterans wore t-shirts with the qualities that connect them listed on the back as they toured Washington DC together. This was the first all-female Honor Flight to travel in from Kentucky. @HonorFlightKY #HFKFamily pic.twitter.com/OyPdrop8Cd

Lt. Col. Missy Logan and her daughter, Capt. Carolyn Furdeck both traveled with the group. They say their service gives them a special bond.

“I had always seen my mother serve and my father served,” Furdeck explained. “I knew at one point I’d want to give back to my country.”

Furdeck served in the Army from 2000 to 2006 as an engineer officer with deployments to Iraq and Afghanistan. Logan joined the Army as a nurse during the Vietnam era.

According to the Department of Defense, women make up just over 16% of the armed forces, but the example set by her mother inspired Furdeck to pursue the service at a young age.

“When I was about 4 or 5 years old, my mother came home from one of her deployments and all the soldiers were coming down off the plane and I asked later if there were any men in the Army,” Furdeck laughed as she explained.

“That was a large medical unit, so there were about 80 nurses and [they were] mostly female,” Logan chimed in. “So that was her field of understanding.” 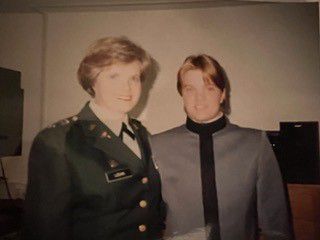 “I think that all the women before me were able to pave the way,” Furdeck said. “I was able to stand on their shoulders.”

Women in the military are now the fastest growing group in the service. This mother-daughter duo said they have learned from one another.

“I had a t-shirt that said, ‘Most people never meet their heroes. I raised mine.’ She’s my hero,” Logan said about Furdeck.

“I am so humbled to have the privilege to go on this flight and I hope there are many more,” Furdeck said, adding she hopes each of the female veterans from Kentucky get to experience a trip like this.