For a time this spring, Heathrow’s chief executive John Holland-Kaye was mucking in on the frontline, stacking X-ray trays at security to help keep queues moving at the short-staffed airport.

Like the rest of the travel industry, the west London airport has roared back to life following two desperate years as border restrictions stifled business.

But Holland-Kaye is already into his next fight in a job that involves leading one of the most controversial businesses in UK aviation.

Britain’s busiest airport — which has suffered £4bn of losses since the start of 2020 — has caused a serious rift in the travel industry by pushing for a 90 per cent rise in the landing fees it charges, enraging airlines that have also suffered billions of dollars in losses and run up huge debts during the crisis.

The antipathy deepened this week when Holland-Kaye unveiled a downbeat assessment of the industry’s recovery, and warned the surge in demand for travel this spring and summer was merely a “bubble” that could be popped this winter.

This view contrasts with a burst of positive commentary coming from other parts of the industry. British Airways’ owner IAG has said a “strong and sustained” recovery is under way. Holland-Kaye’s comments have fueled accusations from airlines that he is deliberately talking down the recovery to persuade the UK regulator to allow Heathrow to hike its fees, which are charged on a per passenger basis.

Virgin Atlantic said Heathrow was putting out “cynical forecasts and conflicting statements”, while the airlines trade body claimed the airport was “trying to drive up charges to support shareholder returns”.

Holland-Kaye was simply trying to offer an honest assessment of an uncertain future. Heathrow does not forecast a return to profit or dividends this year.

“I think we are more realistic and we have been throughout the pandemic . . . it reflects the reality of the world we are living in,” he said this week.

The battle over fees has, on occasion, become personal.

Holland-Kaye was this year forced to step down from a Department for Transport recruitment panel following a backlash from airlines, which objected to his involvement as they rowed over fees.

To its detractors the sprawling airport is a monopoly that abuses its position to charge some of the highest fees in the world.

But to supporters, it is a vital trade and economic hub that should be allowed to charge more to invest and keep pace with European rivals after it was briefly overtaken as the region’s busiest airport during the pandemic.

Unlike many airline bosses, Holland-Kaye is not an aviation industry lifer.

He joined Heathrow in 2009 after working in the housebuilding industry, including at Taylor Wimpey and Taylor Woodrow, and before that for a brewery and a stint at LEK, a consultancy.

Holland-Kaye worked for five years in commercial and development roles at the airport before taking over as chief executive. This included overseeing the launch of the revamped Terminal 2, which was considerably more successful than the debacle when Terminal 5, the home of BA, opened 15 years ago amid chaos and technical failures.

The married father of two, who was paid £1.5mn in 2021, was stepping into controversy when he became Heathrow’s boss in 2014, a position that must be a string of politically and commercially sensitive issues.

Executives at Heathrow have improved that with airlines over regulation and costs are inevitably.

Still, Holland-Kaye has taken a lower-key approach than Walsh or O’Leary, although did become the public face of the battle to build a third runway, which has pitted Heathrow against the communities surrounding it and local policies. 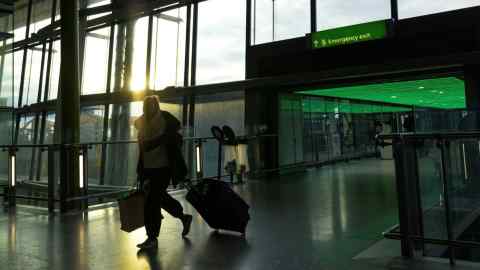 A fierce planning battle now looms over the expansion, which Heathrow puts back on the table this year, having methodically pushed through the process to secure political and legal approval.

Heathrow has also long had a fractious relationship with the airline industry, particularly British Airways, its largest customer.

However, industry figures said Holland-Kaye worked well with current BA chief executive, Sean Doyle, and the pair were in virtually daily contact during the pandemic, including joint pushes to persuade ministers to lift travel restrictions. They even staged a photo shoot stunt on one of Heathrow’s closed runways to highlight the aviation industry’s struggles, along with Virgin Atlantic boss Shai Weiss.

The Civil Aviation Authority will rule on how much Heathrow can charge to land at the airport later this year, and many executives expect the decision to be appealed industry way it goes.

One industry executive said Holland-Kaye had won huge goodwill for his efforts to persuade the government to drop its travel rules. But he has “smashed that all” by trying to raise fees at such a delicate moment, the person said.