A female traffic controller has been caught trapping a driver with cones in a passive-aggressive power move after he ignored flashing warning lights.

Hilarious footage shows the moment the road worker follows a van with a stack of traffic cones and attempts to box it in at the intersection on the Gold Coast, Queensland.

The dashcam video shows a young woman dressed in hi-viz apparently upset the van driver had driven straight around her traffic vehicle with its lights flashing, instead stopping at a set of traffic lights waiting to turn right.

The woman is seen walking past the van before standing in front of it and setting traffic cones in its way.

She then walks around to the back and place cones behind the vehicle, too.

It’s possible the driver drove past the traffic control ute uncertain what its flashing sign meant as it was parked facing the wrong way in a turning lane.

The standoff ultimately ended as the traffic lights turned green and the van driver drove around the cones and carried on through the intersection.

‘Often wondered if traffic controllers needed to know the road rules to get their jobs, (this) leaves me even more confused,’ one person commented on the video.

‘Those traffic cones are safe to drive over – I do it from time to time to make known that I disagree with their site setup… bonus if one gets trapped & ends up 200 meters down the road,’ another person remarked.

Queensland drivers were rated as some of the most irritable in a Budget Direct survey last year.

The survey polled motorists on situations that would cause them to feel angry while driving.

Queensland drivers were among the most aggravated by each of the scenarios, which included aggressive behavior by others drivers, rudeness or discourtesy, and travel delays. 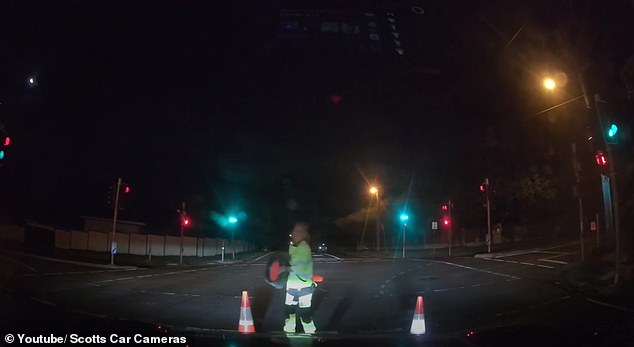