Peter Yarrow performs at the Threadgill Theater. Photo by Will van Overbeek.

In March 1972, a short writeup in the Kerrville Mountain Sun described what locals could expect at the town’s brand-new music festival. Founded by Rod Kennedy, an Austin-area event producer, the festival would be held June 1-3 at the Kerrville Municipal Auditorium and run concurrently with the first Texas State Arts and Crafts Fair. And, it would “include the folk songs which have been passed down through the years.”

When the lineup was announced later that spring, about a dozen mainly Texan luminaries of folk music were on the bill, including Allen Damron, Kenneth Threadgill, Carolyn Hester, Peter Yarrow, Michael Murphey (no Martin in his name then), Steve Fromholtz, Bill and Bonnie Hearne, and Dick Barrett, a National Fiddling Champion from Pottsboro. There would also be a New Folk concert hosted by Yarrow with original songwriters from Texas and other states, and a blues workshop with Mance Lipscomb and Robert Shaw.

Add in the Hill Country’s laidback setting in the 1970s, and the festival had all the right ingredients for success. That first year, 2,800 fans showed up for the concerts, which were recorded for a limited-edition album that came out later that summer. The fest has been going ever since, even survive the cancellation of the 2020 event due to COVID.

This year marks the festival’s 50th anniversary, and a lot has changed since the first one. The location moved to Quiet Valley Ranch, purchased by Kennedy in 1974; the number of days has expanded to 18 (this year, May 26-June 12); and the size has grown exponentially—20,000 attendees are expected this year. But the focus is still on the music and the craft of songwriting.

There are workshops for all levels of musicians on instruments like the guitar, ukulele, and harmonica (registration and fees are required). There are pockets of time set aside for song sharing. And the annual New Folk Finalists Concert, which became a competition in the 1970s, continues to be a highlight. Past year’s finalists have included Nanci Griffith and Steve Earle. 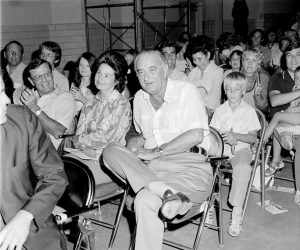 President Lyndon B. Johnson and his wife, Ladybird Johnson, attended the first festival. UT Coach Darrell Royal is seated next to them. Photo from Kerrville Daily Timescourtesy Kerrville Folk Festival

According to Mary Muse, who has been executive director of the Kerrville Folk Festival Foundation since 2015, this year’s theme is “Bridging Generations.” Three artists who played the first festival in 1972 are returning: Bill Hearne, Bob Livingston, and Michael Martin Murphey. Two artists, Kimmie Rhodes and Bobby Bridger, are performing with their sons. On Memorial Day, an In Memoriam program is planned to remember performers and community members who died. The festival is also live-streaming the first five days of the festival for free.

If you’re a newcomer, Muse offers some advice. “Our audience sits on benches and intensely listens,” she says. “When seated on the benches, if you talk much, be prepared to be shushed.”

But don’t get the impression that the festival’s community is unwelcoming, and don’t be surprised if you want to come back year after year.

“When members of our community describe their festival experiences, the words most frequently heard are ‘magical’ and ‘transformational,’” explains Muse, who had her own transformative experience at the festival when she met her future husband about 100 yards from her office at Quiet Valley Ranch. “It is the community—songwriters, fans, volunteers, and more—that creates magic. When you arrive on the ranch, for the first time or the 50th, you will be greeted at the gate with ‘Welcome Home.’”

As one of the original members of the Lost Gonzo Band, Livingston played the first festival. He takes the stage at the Kennedy Outdoor Theater on June 10.

“I was playing bass with Michael Martin Murphey and we were staying at the house of Segle Fry [an Austin restaurateur who was part of the music scene in the 1970s]. We were crashing on couches as mid-morning guitars passed overhead and songs were being sung. Rod Kennedy had an idea to do a folk festival right then and asked us if we wanted to be in it. When we circled back around a few months later, we played to a packed house. 50 years ago!

“I have enjoyed playing the Kerrville Folk Festival over the years. Besides playing the main stage, the Threadgill Theater, I’ve played children’s shows and hosted Ballad Trees. I’ve also played with Michael Murphey, Jerry Jeff Walker, the Lost Gonzo Band, Ray Wylie Hubbard, David Amram, Bobby Bridger, and many more. I love the campfires and have spent many nights wandering like a nomad between posts; 80% of Kerrville is what happens at the campfires.”

Pilant, chair of the Kerrville Folk Festival Foundation Board of Directors, attended his first festival in 1978. He’s been going ever since—he even married his wife there in 1980.

“Townes Van Zandt was not a techie guy at all. I had him listen to some music on a Sony Walkman and he was amazed. He couldn’t believe you could get that out of a tiny little box, and he wouldn’t take it off. Years later, likely in the early to mid-1980s, CDs were brand new. Late one night at the fest, Townes walked me over to the bus and pulled something out of his guitar case. He said, ‘Glen, you’re a technology guy. You probably know what this is. The record company gave it to me when they pressed the new record. I think it’s the only one. I think it’s one of those laser disc things.’ He handed it to me. So, yes, I literally have Townes Van Zandt’s first CD.”

“It was 1975, the second year at the Quiet Valley Ranch, and we had three straight days of brutal rain. It was a mud bog … The old stage was not very waterproof and the whole weekend was just horrible. However, we all pulled it off and it was a great show. We persevered and endured one of the toughest stretches I can remember weather-wise at Kerrville.”

Longtime festival attendee Tom Frost III, a songwriter who was a New Folk contestant in 1988 and ’89, recently retired as an executive at his family’s bank, Frost Bank.

“Rod Kennedy approached me for a Frost Bank loan to the festival in the 1990s. He said the loan was needed to allow the festival to continue. I told Rod that the bank could not loan the festival any money; however, it would loan him the money personally. Rod was elated and signed a note. Three years later, the note was paid in full. Between two performances on the Main Stage, Rod asked me to come up onstage. He held up the canceled note and thanked me for the loan. He handed me the note and took out a lighter and lit it on fire. I quickly dropped it, so not to get burned. The note burned up on the stage floor. When Rod handed me the mic to say a few words, I said, ‘Rod, I bet this is the first campfire you’ve ever had on the main stage.’”

“Some of my fondest memories of the Kerrville Folk Festival are the Threadgill Theater kid shows we’ve played over the years with storyteller Gayle Ross. Over the past 30-plus years, we have seen kids grow up and then bring their kids. Now those kids are having kids. Some ‘kids’ return year after year well into adulthood. I hear that others still listen from the top of the hill (the stage area reaches all the way up the hill to the campsites up on Whiskey Ridge), where they have their own festival going. We build a festival for the future beyond our years, and I’m proud to be a part of that legacy.”

Hickman, the 2010 Official Texas State Musician, has played the Kerrville Folk Festival since the 1990s. She performs with her band, The #5 Machine, on June 6.

“I had just finished my set on the main stage and received a rousing standing ovation. As I turned to leave the stage, Rod Kennedy walked over to me and insisted I go back out to sing another song. However, my newborn baby, Lili, was waiting for me backstage in the arms of a friend, awoken by the applause and crying. All I wanted was to be reunited, but Rod got on the mic and asked the audience if they wanted one more, to which there was the roar of an unanimous yes. I was torn, but I told Rod I would sing again but only if I could bring Lili out with me, and his loving smile reassured me I could. With a very sleepy Lili safe in my arms, and a thunderstorm on the horizon, I returned to the microphone, informing the audience that I would be proud to sing one more song, but I needed them to promise not to applaud when I finished because I didn’t want them to startle or frighten Lili.

“I decided that the best song to sing in that moment was an a cappella love song I had written for Lili. So, with Lili’s head resting on my shoulder, I sang with all my heart, feeling my baby’s heartbeat on my chest. I closed my eyes, singing to the top of my range and with controlled, loving emotion, conveying how much I adore this little being. As the last of my notes drifted off into the dark night, I nervously awaited to see what would happen. To my joy and surprise, not one single person broke the love-filled moment nor the silence that followed. There I was, in the midst of 3,000-plus people, all holding their applause, with not a single peep except the sweet sound of crickets and the rumble of thunder. I felt overwhelmed with gratitude.

“It was an enormous blessing to share that beautiful moment with the Kerrville community because it exemplified everything the Kerrville Folk Festival is about—authenticity, music, and the depth of connection between a performer and those truly listening and understanding how we are all connected by an invisible force—including love through song.”