The United States has banned more than 600 individuals with connections to the Kinahan organized crime gang from entering the country.

The entry ban is specifically aimed at the sport of professional boxing. Its part of a co-ordinated drive by laws enforcement agencies in the US and Europe against the Kinahan organized crime group.

Last month gardaí and the US Treasury Department announced the worldwide financial sanctioning of seven individuals and two companies connected with the Kinahan organized crime gang – a process that would also lead to travel restrictions.

The scale of that travel ban became clear following a meeting in Washington between Assistant Garda Commissioner John O’Driscoll and US Customs and Border Protection.

Assistant Commissioner O’Driscoll told RTÉ News “the number of people who have been denied entry into the US has grown – it is over 600 at this stage – as a consequence of the targeting of the Kinahan organized crime group”.

“We’re satisfied that the people concerned who are involved in criminality associated with that organized crime group will be denied entry into other jurisdictions, if they were to try and gain entry,” he said

The travel ban appears to be particularly affecting individuals connected with the Kinahans through the world of professional boxing.

Assistant Commissioner O’Driscoll said “what has been displayed as a consequence of the sanctioning is the connection between the Kinahan organized crime group and, for example, sport – and businesses associated with boxing in particular. And its connections with the US are a particular focus of the US authorities.”

Its not just boxing – any businesses and individuals connected with the Kinahan group’s interests are being hit with travel bans.

“Of course, we’ve seen the wide range of other companies associated with those that are sanctioned. And anyone who has any part to play in any of those companies will be prevented from entering the US,” Assistant Commissioner O’Driscoll said.

As well as the financial sanctions announced last month, the US Department of State posted a reward pool of up to $5m for information that could help to prosecute the group.

According to Assistant Commissioner O’Driscoll, that reward pot is yielding information that could assist in prosecutions in a number of jurisdictions.

One of his meeting this week was at the Drugs Enforcement Agency, to set up a system for sharing out the information to ensure it reaches the most appropriate agency to take action. 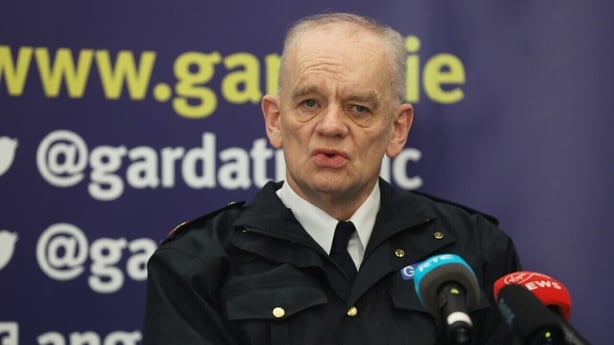 “We’re satisfied following our meetings here in Washington that there has been considerable interest in that reward scheme to the extent that it requires some logistics around the sharing of the information and evaluating each piece of it.

“The amount is significant. It ranges in quality, but certainly does offer the prospect of additional actions being taken by law enforcement across the globe”.

He said he was satisfied “that there will be additional actions in relation to criminal prosecution, both in Ireland and maybe further afield relating to those who are at the apex of the Kinahan organized crime group”.

Assistant Commissioner O’Driscoll said that in follow-up talks with colleagues at Europe and the US agencies the initiative unveiled at City Hall in Dublin last month “is now described as a potential template for taking on other organized crime groups that have a transnational aspect to them.

“That is spoken about both here in Washington and in the Hague in terms of Europe’s interest in how we went about our business in this particular project,” he said.

Under Commissioner Drew Harris, An Garda Síochána has expanded its “liaison network” of officers stationed in other countries – which now includes Washington DC and Bogota, in Colombia.

The officers liaison are tasked with engaging with law enforcement agencies in North, central and South America to ensure better co-ordination in operations targeting particular criminals and crime groups.

As well as official agency business, Assistant Commissioner O’Driscoll attended the annual Peace Officers Commemoration, which took place on Capitol Hill, and was addressed by US President Joe Biden.

Its a part of the US National Police Week. The Commemoration was established by President John F Kennedy in 1962.

An Garda Síochána, which marks the centenary of its founding this year, was invited to participate in a wreath laying ceremony on behalf of international law enforcement agencies.

“It’s an event that serves to remind us of the tragic consequences of criminal activity by those engaged in serious and organized crime,” Mr O’Driscoll said, adding that “it gives us an opportunity to demonstrate that those people who we remember today have not lost their lives in vain, and we are determined to continue the pursuit of serving our communities, protecting them from serious and organized crime”.

“We also recall today all the members of An Garda Síochána who died in the line of duty, and indeed people like Private Kelly, a member of our Defense Forces who died in Ballinamore, along with Recruit Garda Gary Sheehan.

“We remember all those who have died in pursuit of protecting communities in Ireland. And I have an opportunity in representing International Law enforcement to recall colleagues that we have worked with in Europe and further afield in protecting those who are vulnerable to the activities of organised. crime”, he said.