Hundreds of rallied in solidarity with nurses at Maine Medical Center on Wednesday morning, braving a steady rain to urge management at the state’s largest hospital to agree to adequate staffing levels, competitive benefits and wages, and other policies to improve working conditions and patient safety within nurses ‘ first union contract, which is currently being negotiated.

The rally, which took place both Wednesday morning and evening, came nearly a year to the day after a strong majority of nurses at the hospital voted to join the Maine State Nurses Association (MSNA), overcoming an aggressive anti-union campaign by hospital leadership.

Now, though, nurses are still negotiating their first contract with the hospital. While progress has been made in some areas, management still has not agreed to take steps within the contract that resolve significant issues at the hospital, nurses said at the informational picket held Wednesday in front of Maine Med in Portland.

“We are standing out here so management knows we are completely unified, that we are here and we’re not going away, and it’s time for them to realize that we deserve a seat at the table,” said Jonica Frank, a registered nurse working in the operating room at Maine Med.

Frank said while meetings have been taking place between the nurses’ bargaining team and management, the pace of progress has been slower than the nurses had hoped.

An important issue that still needs to be ironed out within the contract is safe staffing levels, she said. Frank said the ratio of nurses to patients must improve so that nurses are able to pay more attention to each individual patient rather than having to juggle providing care for myriad people at once.

“One of our number one goals is to have safe staffing and Maine Med has already shot that down and said they don’t want to change our ratios. And that’s not okay. Our patients deserve better, our staff deserve better,” she said, noting that not having adequate staffing is a safety issue for patients and nurses.

Frank added that nurses are also seeking increased safety in the workplace, additional time for breaks, and protection for per diem nurses. In material provided to the media, MSNA said the hospital is attempting to exclude per diem nurses from “just case” protections they have agreed to for other nurses, which the union said is unable.

Nadine Kern, a registered nurse at Maine Med who works in the surgical trauma ICU, said another priority with the union contract negotiations is conducting that working conditions at the hospital lead to nurses wanting to stick around.

“The biggest reason I’m out here is to retain the amazing nurses that we have in the walls of the hospital,” she said. “Having a fair contract and getting that as soon as possible is going to help with retention. It is the biggest thing that will help retain nurses here at Maine Medical Center.”

Signs and supporters at the April 27, 2022 rally in support of Maine Medical Center nurses. | Beacon

Additional priorities for nurses in the contract negotiations, according to an MSNA informational sheet, include advocate that travel nurses aren’t prioritized for hours over permanent staff, getting better accommodations for working “on-call” such as increased pay and time off the next day, improved overall pay and benefits to help retain nurses, establishing a committee of nurses to advise hospital leadership on how to improve patient and nurse safety, and ending rotating shift hours that nurses say are unhealthy and unsafe.

The informational sheet did note that Maine Med has agreed to a policy within the union contract that will ensure patients are cared for by the nurses who are most qualified to provide treatment for them and that the bargaining team has also taken steps forward on gaining protections against discrimination and unfair discipline and creating a grievance and arbitration system that will hold management accountable if the eventual contract is violated, among other other policies.

“We are committed to making progress on all these issues in our first union contract,” said Madison Light, a registered nurse in the interventional radiology unit and a member of the union bargaining team. “That’s why we want to get the best agreement we can for our patients, ourselves and our community. Everything we win in this contract will not only benefit us, but our patients as well. There is no difference between the conditions in which we work and the conditions within which patients receive their care.”

In response to the picket Wednesday, Maine Medical Center Chief Nursing Devin Carr a statement saying that “Nurses and the hospital share a commitment to provide Officer that MMC continues to be an outstanding place to both give and receive care, and contract discussions with the labor union represents nurses at MMC have been respectful on all sides.”

“MMC is committed to bargaining in good faith and working toward a contract that is fair to the nurses as quickly as reasonable,” Carr added. “There have been 20 bargaining sessions to date and negotiations are progressing on the schedule agreed to by both parties.”

Along with nurses, Wednesday’s rally also featured a large number of people from the Portland community, fellow union members, and advocacy groups. Walking up and down the street in front of Maine Medical Center, participants waved signs of support for the nurses and recited a litany of labor chants, such as “Portland is a union town.”

Frank said the level of support from the surrounding community is extremely heartening and makes nurses even more resolved to win a fair first contract. She added that nurses and community members are united in wanting an agreement that will enhance patient safety.

“We are unified, we are strong. Maine Med would love to see a crack in our foundation. Look at this. It’s not there. There’s no crack there,” said Frank, pointing towards the large crowd of supporters. “We are strong and they need to recognize that and they need to start working with us. They need to give us a good contract.”

Kern agreed, saying the level of support for the union demonstrates the impact nurses have. 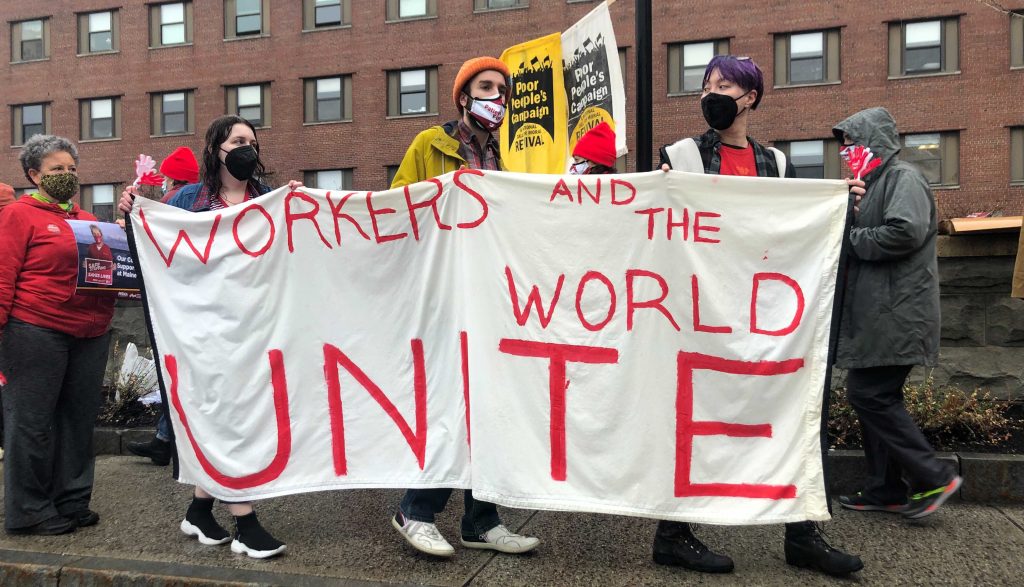 “Workers and the World Unite” read a banner at the April 27, 2022 rally in support of Maine Medical Center nurses.| Beacon

After the march in front of Maine Med, supporters gathered at a nearby park, where fellow union members and advocates expressed support for the nurses’ bargaining effort.

The nurses’ bargaining drive is also supported by dozens of state lawmakers, who sent a letter Wednesday to Maine Medical Center President Jeff Sanders and Board of Directors Chair Kathy Coster urging the hospital to agree to the changes pushed for by nurses.

“We know Maine Medical Center nurses care deeply about improving staffing, safety in the workplace, patient safety and retention of employees. We support progress on all of these fronts as it will benefit all Mainers. We, as leaders, respectfully urge Maine Medical Center to negotiate and settle a fair contract in a timely manner,” the letter reads. The document was signed by over 55 lawmakers, including Senate President Troy Jackson (D-Aroostook) and Speaker of the House Ryan Fecteau (D-Biddeford).

The fight for a fair first contract for Maine Medical Center nurses comes as the organized labor movement has renewed momentum behind it. Advocates said 2021 was a watershed year for building worker power in Maine, pointing to victories such as the formation of the Maine Med union along with a union for workers at the Portland Museum of Art and a litany of successful contract negotiations.

While the number of workers in a union was still down significant from organized labor’s heyday, there was also increased activity in the workers’ rights movement around the country in 2021, with over 100,000 workers voting to go on strike during the course of the year and thousands standing on picket lines to push back against workplace conditions that have often gotten more dangerous amid the COVID-19 pandemic.

Such activity has only accelerated in the early months of 2022, as successful unionization campaigns take place around the country at large corporate entities such as Starbucks. Labor also won a massive victory earlier this month when workers at an Amazon warehouse in Staten Island voted to unionizeovercoming an aggressive union-busting campaign by the powerful corporation.

In Maine, one of the most closely-watched unionization campaigns in 2022 is at Bates College, where workers are attempt to form a bargaining unit amid an anti-union campaign by the college. The results of that election are currently delayed because the Bates administration is seeking to split workers into different bargaining units.